Sāvitri is based on the ancient Hindu Legend from The Vana Parva (The book of the Forest) of the Mahābhārata.

A contemporary 40-minute film of the outdoor chamber opera by Gustav Holst.

A legend for our time.

The story of Sāvitri is based on the ancient Indian legend of a powerful female princess who falls in love with Satyavān, an exiled prince, who is prophesied to die young. She marries him with this looming knowledge. Exactly one year into their marriage, she is visited by the God of Death—Yama—who informs her that he has come to claim Satyavān’s life.

Satyavān is suddenly struck down by a deadly illness as Death looms over him, claiming his soul.

Instead of giving into fear and loss, Sāvitri engages Death in a dialogue, inviting him into her world. Death, charmed by her humanity and impressed by her resilience and devotion/sanctity, offers Savitri a consolation… 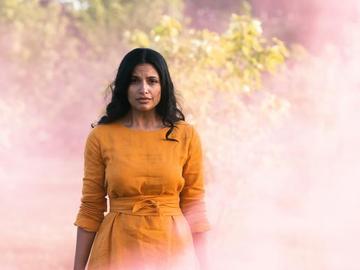